The Other Apartment is a collaborative project between Pittsburgh-based artist Jon Rubin and Tehran-based artist Sohrab Kashani that occurs simultaneously in Kashani's apartment in Tehran, Iran, and an exact replica of that apartment and all of its contents at the Mattress Factory Museum in Pittsburgh, U.S.. Using detailed photographs from Kashani (who is not able to travel to the U.S. due to the current travel ban on Iranian citizens), the artists worked with a team of fabricators to meticulously recreate his Tehran apartment’s facade, interior architecture, and all of his personal possessions. From his soap dish to his furniture, everything in The Other Apartment has been purchased, altered, or entirely fabricated to replicate what exists in Kashani’s apartment. 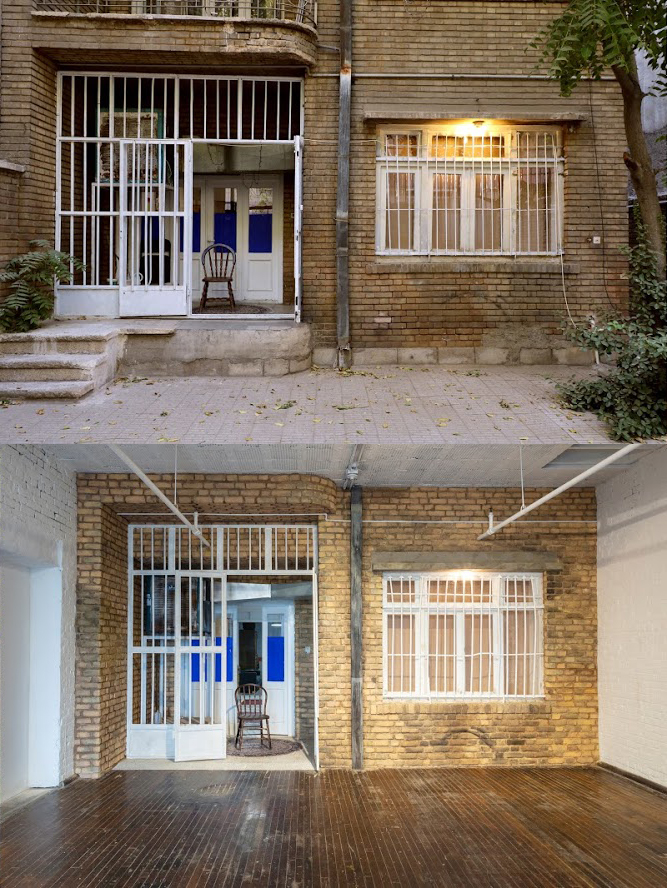 For the past 11 years, Kashani has used his apartment as a space for exhibiting contemporary art and as an artist residency, one of the first of its kind in the country. From September 2019 through July 2020, Kashani and Rubin will operate the space together in The Other Apartment, producing exhibitions, programs, and events where every object, video, and performance that happens in one space is reproduced for the other, keeping both apartments identical across the 6,300 miles that separate them. 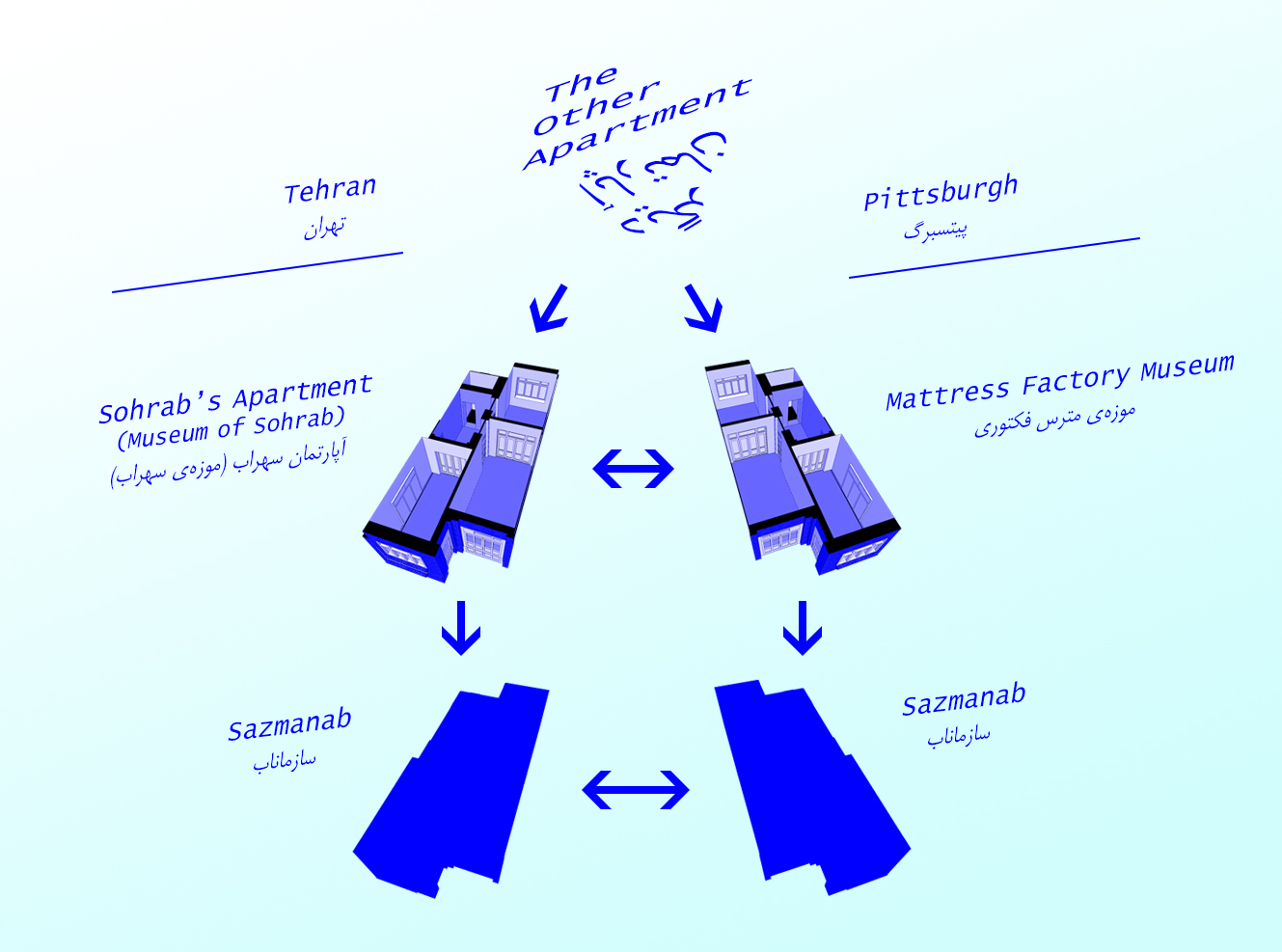 To visit Sazmanab programs at Sohrab's apartment in Tehran, visit the online appointment system. Address and directions to will be provided upon confirmation of booking. Book your visit

Tehran (Sohrab's apartment): Address and directions to Sohrab's apartment will be provided upon confirmation booking. Pittsburgh (Mattress Factory Museum): The Mattress Factory Museum is located in Pittsburgh’s historic North Side, just minutes from downtown Pittsburgh. Free parking for Mattress Factory guests is provided in the museum parking lot, located at 505 Jacksonia Street. Please note the lot is locked after museum hours.
Located within The Other Apartment, in both Tehran and Pittsburgh, is a contemporary art space called Sazmanab. Sazmanab produces exhibitions, programs, and events where every object, video, and performance that happens in one space is meticulously duplicated for the other. For more about the history and past events at Sazmanab click here. 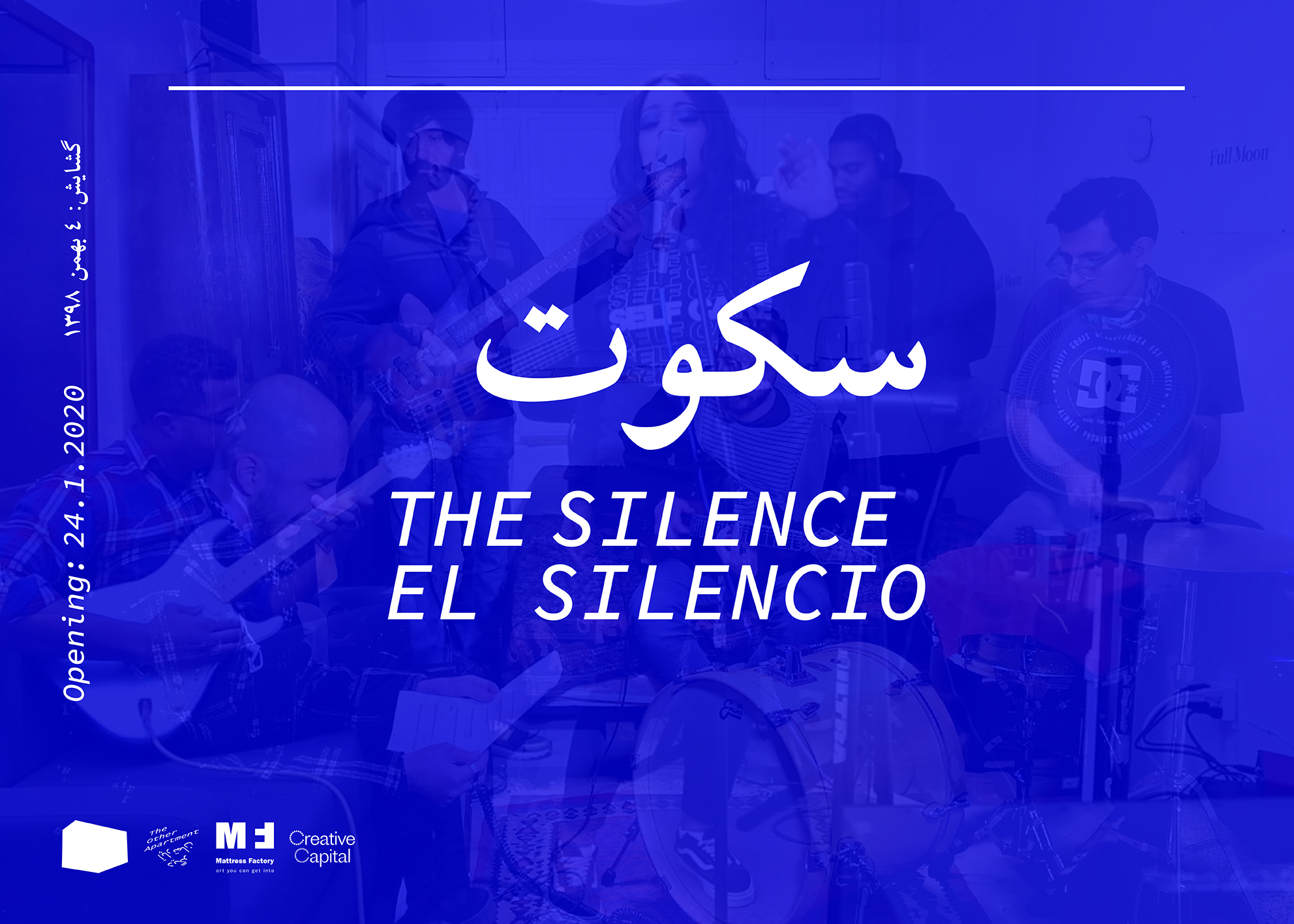 Last month, mysteriously, a DIY cassette tape appeared on the bookshelf in the Pittsburgh version of The Other Apartment. With a little research, we discovered that the tape was secretly left* on the shelf by the lead singer of the Mexican band Para Decir Adioss. At first, we thought it was strange that anyone was still using cassette tapes. We immediately loved the idea that a Mexico City band thought that leaving a demo tape in a Pittsburgh replica of a Tehran apartment would be a good promotional idea. So, we decided to create an exhibition based entirely on this one cassette tape. For the exhibition The Silence, we invited musicians in Pittsburgh and Tehran to come to The Other Apartment and perform cover-versions of all the songs on the cassette. The filmed performances are being screened where they were shot, in the bedroom, office, bathroom and living room of the apartment. Cassette tapes of all the cover songs are available for purchase in both the Tehran and Pittsburgh versions of the apartment. With the constant conflict between our countries hanging over us, we, like many artists, question whether what we are doing is a bit pointless and absurd. Maybe we’re being naive, but it seems like musicians never question what they should do when times get hard, they do what they always do, play music. And everyone knows that music makes equal sense in both good and bad times. So, we’re incredibly thankful to the Iranian and American musicians who agreed to come to the same place and play some music by a Mexican band. * We do not recommend leaving objects in The Other Apartment. Sohrab Kashani and Jon Rubin All original songs by Para Decir Adioss: Kicha Baptiste (guitar, noise voice, lyrics), Olvido Baptiste (chorus girl), Nobody S. (bass, studio engineer), Kitty Weiss (drums, keyboard, booking management)
2019 All rights reserved. Christian Bautista Arriaga, Morelos, México.

Curated by Joseph Del Pesco (US) and Sohrab Kashani (Iran) Six artist videos, presented in three pairs, each stand alone, yet they are linked by the use of extra-diegetic audio-a layer beyond the sound that syncs up with what we see. One of the most prevalent examples of this added layer is the voice of the narrator, which is often used as an expository accompaniment, supporting the narrative in cinema. However, in these videos, the voice-over has been reimagined as a vehicle for interpretation and reflection, questions and provocations. The speaker who is heard as voice-over is never seen, and the language is suggestive of a complex and at times abstract inner world. Each pair brings together an American and an Iranian artist, echoing the bi-location of Sazmanab's exhibition venue in Tehran, and its mirror in The Other Apartment at the Mattress Factory in Pittsburgh. While the pairs are presented without thematic labels, close attention reveals associations between each duo; a description of the activities of a single person, mythological atmospheres, and a weaving of poetic rhythm and visual memory. Artists include Morehshin Allahyari, Alex Da Corte, Arash Fayez, Sara Magenheimer, Siavash Naghshbandi, and Beatriz Santiago Muñoz. Part 1 Siavash Naghshbandi (Iran) Daily Life of Human (2019) + Alex Da Corte (United States) Slow Graffiti (2017) Part 2 Morehshin Allahyari (Iran) She Who Sees the Unknown: Huma (2016) + Beatriz Santiago Muñoz (Puerto Rico) La cabeza mató a todos (The Head that Killed Everyone) (2014) Part 3 Arash Fayez (Iran) Three, Rather Than Two (or One) (2019) + Sara Magenheimer (United States) Art and Theft (2017) The exhibition is made possible with support from Creative Capital and Video Data Bank.
For press inquiries please write to info(at)theotherapartment.com.